2. Given the problem to maximize
f(x), X = (xl,x2,…….xn) subject to m number of inequality constraints.
g(X)<bi, i= 1,2…..m
including the non-negativity constraints x > 0.
Which of the following conditions is a Kuhn-Tucker necessary condition for a local maxima at x’ ?

9. Which once of the following is not a software myth?
(A) Once we write the program and get it to work, our job is done.
(B) Project requirements continually change, but change can be easily accommodated because software is flexible.
(C) If we get behind schedule, we can add more pro grammers and catch up.
(D) If an organization does not understand how to control software projects internally, it will invariably struggle when it outsources software projects

13. The document that is used by XSLT to indicate, how to transform the elements of the XML document to another format is
(A) HTML page
(B) DOC type procedure
(C) Style sheet
(D) Stored procedure

14. Which of the following concepts means adding new concepts to a program as it runs ?
(A) Data hiding
(B) Dynamic loading
(C) Dynamic typing
(D) Dynamic binding

17. The compiler converts all operands upto the type of the largest operand is called
(A) Type Promotion
(B) Type Evaluation
(C) Type Conversion
(D) Type Declaration

22. What are the final values of Q1 and Q0 after 4 clock cycles, if initial values are 00 in the sequential circuit shown below : 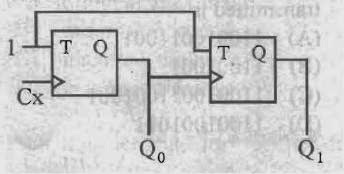 23. High level knowledge which relates to the use of sentences in different contexts and how the context affect the meaning of the sentences ?
(A) Morphological
(B) Syntactic
(C) Semantic
(D) Pragmatic

26. The mean-end analysis process centers around the detection of differences between the current state and goal state. Once such a difference is isolated, an operator that can reduce the difference must be found. But perhaps that operator can not be applied to the current state. So a sub-problem of getting to a state in which it can be applied is set up. The kind of backward chaining in which operators are selected and then sub goals are set up to establish the precondition of operators is called
(A) backward planning
(B) goal stack planning
(C) operator sub goaling
(D) operator overloading

31. Consider the formula in image processing
RD = 1-1/cr
Where CR = n1/n2
CR is called as compression ratio n1 and n2 denotes the number of information carrying units in two datasets that represent the same information. In this situation RD is called as relative________of the first data set.
(A) Data Compression
(B) Data Redundancy
(C) Data Relation
(D) Data Representation